Are you seeking information on Pennsylvania park ranger training and degree requirements in order to advance your career? We have some helpful information for you.

The Pennsylvania Department of Conservation and Natural Resources (DCNR) Bureau of State Parks utilizes park rangers to manage the state’s elaborate collection of state parks, and its additional natural resources. The DCNR utilizes the term “ranger” for the law enforcement officer who works in the parks and woods through the state.

Forest rangers and Park rangers in the state hold the same power. Park ranger job duties in Pennsylvania include: 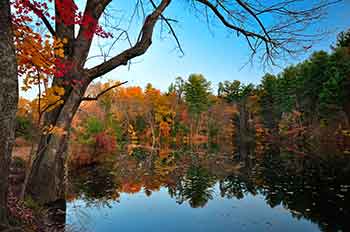 One of the responsibilities of the park ranger is to patrol the park to which he or she is assigned among the 120 state parks of the Commonwealth, which usually see at least 38 million visitors each year.

Professional park rangers are available to answer inquiries and clarify regulations and rules to visitors. Park rangers manage the process of assessing buildings, the property and environment for indications of cleanliness, security risks and vandalism. At times, park rangers are called upon to administer CPR or first aid. Park rangers also utilize various motor vehicles that can include snowmobiles, ATVs, and watercraft.

The park system is a major economic stimulator:

People that are seriously interested in becoming Pennsylvania park rangers must:

Although there aren’t any specific requirements for education in becoming a Pennsylvania park ranger, procuring an official degree will usually better position applicants in the process.

There are highly relevant degree programs when people are considering becoming park rangers in Pennsylvania:

The State Civil Service Commission must be first taken by all nominees for park ranger work in Pennsylvania. Upon finishing the assessment, candidates will be evaluated using their history, in addition to their civil service test outcomes.

Park ranger candidates in Pennsylvania will be given two and a half hours to finish the exam (civil service), including the following areas that are significant subjects:

All tests are administered Monday through Friday. Although assessment dates are limited at these places, added evaluation facilities can be found in Scranton, Erie, Johnstown, and Lock Haven. Nominees can find out more concerning the civil service exam dates by calling this number: 717-787-7811.

Park rangers working through the National Park Service have a particular standard of demands, such as the following:

Park ranger job candidates must have a minimum of one year for specialized experience at the level of GS-4 or hold a Bachelor’s degree from an approved school or university (or a mixture of schooling and expertise). People who qualify via education should have a minimum of twenty-four hours of coursework that was related, and includes study in these areas:

National Park Service park ranger training is achieved through at least one of the Learning centers:

The following represent several of the popular parks in the state:

Created in 1893, The Pennsylvania Bureau of State Parks has expanded to well over 100 parks; this makes it one of the biggest park systems in the United States.

A park ranger in Pennsylvania takes home a great salary while pursuing a fulfilling career protecting the land of his or her state. According to the Bureau of Labor Statistics, the average Park Ranger in the state of Pennsylvania makes a median salary of $65,770 per year.

Get Your Degree!
Find schools and get information on the program that’s right for you.
(It’s fast and free!)

Choose your area of study and receive free information about programs you are interested in. Park rangers are responsible for protecting our parks and wilderness areas as well as guiding and educating the public. These duties are the same across the local, state, and national levels. Park rangers pursue degrees related to parks and recreation, environmental science, as well as law enforcement and criminal justice.

Continue »
Get Your Degree!
Find schools and get information on the program that's right for you.
(It's fast and free!)

Choose your area of study and receive free information about programs you are interested in. Park rangers are responsible for protecting our parks and wilderness areas as well as guiding and educating the public. These duties are the same across the local, state, and national levels. Park rangers pursue degrees related to parks and recreation, environmental science, as well as law enforcement and criminal justice.

Recent
Jim Sloop
Design
Navigation
User-Experience/Performance
Information
Overall
I'm on my way to becoming a Colorado Park Ranger due to this site! Selecting a program was easy and painless!